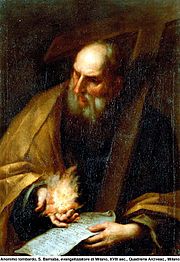 The name is borne by St. Barnabas, a companion of St. Paul who was instrumental in converting gentiles to the new Christian faith. St. Barnabas was believed to be a Cypriot Jew whose true name was Joseph but he is referred to as Barnabas in Acts 4:36, which describes the name to mean “son of consolation,” possibly being linked with the Aramaic בר נחמה, bar neḥmā of the same meaning. Many linguists contradict this meaning and claim that the latter part of the name might actually be derived from the Hebrew nabī נביא meaning “prophet.”

St. Barnabas is considered an early apostle and the founder of the Christian Church in Cyprus who was eventually stoned to death by an angry mob in Syria. He is considered the patron saint of Cyprus and his feast day is June 11th.

As a given-name, Barnaby has been the preferred form in England since medieval times. Its usage spread to the rest of the English-speaking world through colonialism. It spawned the diminutive off-shoot of Barney, which has been used as an independent given-name in its own right.