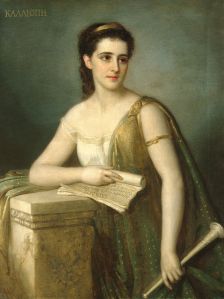 The name is composed of the Greek elements, καλλος (kallos) “beauty” and οψ (ops) “voice.” It is borne in Greek mythology by the muse of epic poetry and eloquence. She was said to be the mother of Orpheus and was said to be the chief among the muses by Hesiod and Ovid.

The name is also borne by a Catholic and Christian Orthodox saint who was tortured and martyred for refusing a suitor who wanted her hand in marriage as well as for her to renounce her faith.

It is also the name of a type of musical instrument as well as genus of hummingbird.

In recent years, it is the full name of a fictional character on the popular tv series, Grey’s Anatomy, Callie Torres, portrayed by Sara Ramirez.

In the English-speaking world, the name first came into use in the early 18th-century.

The name recently entered the U.S. Top 1000 Female Names, coming in as the 939th most popular female name.

A common short form is: Callie.