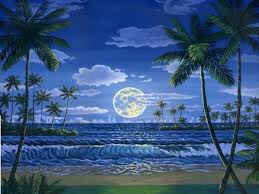 The name is a combination of the Hawaiian na (the) and lani, which can either meaning “heavens; sky” or “chief, majesty.” According to census records I could find, the name seems to have been in use for both males and females since the late 1880s, though since Hawaiian is an ancient language, it was most likely in use even longer than that. As of 2016, the name was the 985th most popular female name in the United States.