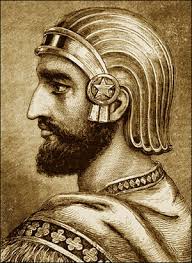 The name is found in History and in the Old Testament as the name of one of the most powerful leaders who ever lived, Cyrus the Great (c. 600 BC or 576 BC–530 BC). He was a conqueror of the Babylonians and who, according to the Bible, freed the captive Jews, allowing them to return to their homeland. It is also borne by several other Persian kings.

Cyrus, in its Persian form, has always been a popular male name in Iran. In the English-speaking world, it did not catch on until after the Protestant Reformation. Currently, Cyrus is the 488th most popular male name in the United States, (2010). The name is commonly used among Iranian-Americans, due to it being such a classic name in Iran and the fact that it is easily translatable to English.

As for its etymology, general consensus agrees that it may derive from the ancient Persian elements khor (sun) and vash (likeness). However, the noted linguist, Karl Hoffman (1915-1996), argued that it is based on an Indo-European root meaning “to humiliate.”

The designated name-days are: January 31 (Poland) and September 12 (Poland).
The name has several feminine offshoots, including Cyra, (Eng. SY-rah), which was a popular female name during the Byzantine empire and the Russian, Kira (KEER-ah). Kira  is currently the 90th most popular female name in Hungary, (2010) and the 308th most popular in the United States, (2010). Other feminine forms include:
The designated name-days for Kira are: March 10 (Latvia), March 12 (Russia), July 7 (Poland), October 12 (Latvia). November 7 (Estonia).
Source