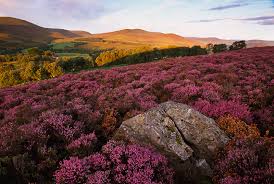 The name comes directly from the name of the flowering shrub which commonly grows in rocky areas. The heather is symbol for Scotland and the word was popularized as a feminine given name name both in the British Isles and in the United States by those of Scottish ancestry. The name was originally used in reference to cultural pride. In 1975, Heather was the 3rd most popular female name in the United States. As of 2010, it was the 683rd most popular female name.

The masculine form is Heath.

The name is borne by several actresses.