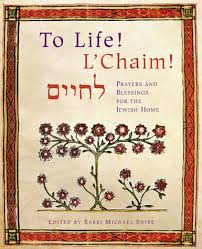 The name is derived from the Hebrew word for life and has been used by European Jews since at least the Middle Ages. The name was often given to sick neonates in the hopes that the child would become healthy by being given an auspicious name.

In Jewish tradition, L’Chaim (to life) is a toast.

Other forms of the name include the Yiddish Hyman and the feminine, Chaya חַיָה,