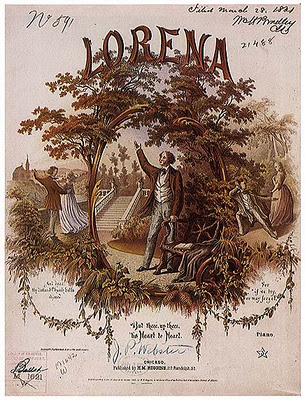 Though it has a latinate sound, Lorena seems to be a very early American invention. It first appears out of nowhere as the subject of a 1856 song, written by a Rev. H.D.L Webster. It is almost for certain that Webster invented the name himself. The song is about a broken relationship Webster had with a girl named Ella Blocksom. He is said to have been inspired by Edgar Allen Poe’s ladylove, Lenore of the Raven, by rearranging the letters, he came up with the sonorous Lorena.

The song was such a hit during the American Civil war that it was often sung by both Confederate and Union soldiers, usually while remembering their far off wives or ladies they courted. No doubt, this caused the name to become a standard and over the past 150 years, it has reached other shores. It is now used across Europe including the former Yugoslavia. In fact, it is currently the 13th most popular female name in Croatia (2009) and the 86th most popular in Bosia and Herzegovnia (2010). Its ranking in other countries, including the United States, are as follows:

It is also the name of a municipality of São Paolo, Brazil, a city in Texas and is used as an alternate name for the Ghost Town of Masonic, California.