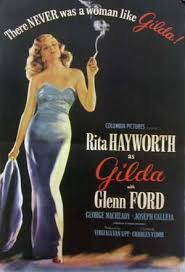 The name is derived from the Germanic element, gild, meaning “sacrifice; value.”

It was the name of a title character in a 1946 film starring Rita Hayworth.

The name was also notably borne by American comedienne, Gilda Radner (b.1946), one of the original cast members of Saturday Night Live. She died at the age of 42 from ovarian cancer, and since has become an icon for ovarian cancer awareness.