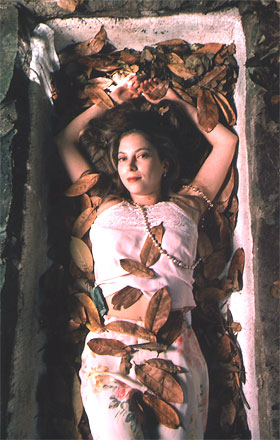 This name has been erroneously listed as a feminine form of Shane or as an Irish name meaning “god’s gracious gift.” However, the name has a much deeper history than Shane and it has been around long before the cowboy.

In fact, the name is a traditional Ashkenazim female name. It has been popular among German, Polish and Russian Jews for centuries. Though a popular Jewish name, the name has no religious significance. Like many European female Jewish names that popped up in the Middle Ages, its a name that is derived from a vernacular word.

Since Yiddish is a Germanic language, the name Shayna is closely related to the modern German word schön “beautiful.” It is not a Hebrew name like other sources on the Internet have suggested, but it may have Aramaic roots as well, as the Aramaic word for peace is also shayna. Since Medieval Jews were fans of double entendres, the name have been used in reference to both sources.

In Medieval Germany, the German Jews adopted the local language, Old High German, and began adding vocabulary from other sources, such as Polish, Aramaic and even French and Spanish. Shayna is derived from Germanic roots, possibly from the feminine Old High German word for “beautiful,” and the name may also be linked with the Aramaic word, shayna meaning “peace.” In fact, Shayna has also been used among Assyrian Christians in recent years, also spawning a masculine variation of Shayno.

Since Yiddish was rendered in Hebrew, its most accurate transliteration should actually be Shaynah. However, since the Ashkenazim Jews were dispersed throughout Western and Central Europe, it has taken on various spellings depending on the native language of the bearer.

In Poland it was rendered as Szejna, in Germany as Schoene, Scheina, Schayna and in English as Shayna, Shana or Shaina.

In modern France, the Shaïna form has suddenly made its way into the French top 1000.

It is safe to say that the name first cropped up in Germany around the 13th century where it is recorded as Schoenlein, Shoinlin and Shonlin (all diminutive forms) in Koblenz Germany (cir. 1264 C.E.).

Schoene, Schoenele (a diminutive form), and Schoenle appear around the 1300s in other parts of Germany.

In 1555 Alsace, there is record of Schoenlen, (most likely a diminutive as well).

The name had official cognates depending on the country of origin.

Among Spanish and Italian Jews, it is Bella/Bela/Belisa

In Russia, all Shaynas were designated as Sofiya/Sophia for their Russian name.

In Hebrew, the official translation is Yaffa.

Many Jewish immigrants to the United States translated the name as Sadie, Jenny, Shirley, Susan or Charlotte.

An interesting and fresher variation that doesn’t have a history as a given name, but certainly would make a lovely option is Shaynkate, which is from the Yiddish word for “beauty.” Technically a masculine Yiddish form would be Shayn, but there is no history of it ever being used as a given name for males among Jews.

The name was not revived by Jewish American families till after the Second World War.

It is also borne by the daughter of Van Morrison, Shana Caledonia Morrison (b.1970 pictured upper left).

Since Jewish families often took matriarchal surnames, (that is, surnames based off a of a feminine name versus a masculine name), it has spawned several common Jewish Surnames such as Scheindlin, Schonfeld, and the Polish Szejna. It is currently borne by Polish Minister of the European Parliament Andzej Jan Szejna and TV Personality and Judge Judy Scheindlin.

The name has a very soft and pleasing feminine sound. Unfortunately, it has been mistaken as a trendy name by many name enthusiasts, and its history overlooked. Despite the misconception, the highest Shayna ever ranked in popularity was around 1991 at # 381. It currently comes in at # 978 (2008).