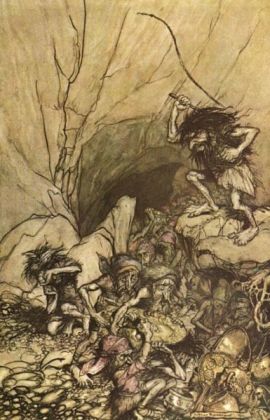 The name is a Norman French form of the Germanic, Alberich and was very common in Medieval England.

The name Alberich itself is derived from two Germanic elements, alb meaning “elf” and rich meaning “power, authority or rule” hence the name means either “elf power” or “elf ruler.”

Alberich appears in Germanic mythology as the name of a malevolent elf king. The same character appears in the Nibelungenlied.

The name was borne by a 12th-century English saint. He was known for founding the Cistercian order of monks.

It was also borne by Alberich Zwyssig a Cistercian monk, (born Johann Josef Maria Zwyssig also known as Father Alberich or Father Aleberik), he is credited for composing the Swiss Psalm or the present day, Swiss national anthem (1841).

A more feminine alternative, is the flower name, Aubrieta.

(Pictured at right, Alberich of the Nibelungenlied by Arthur Rackhum).